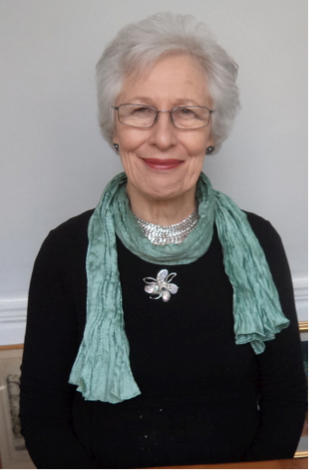 Penrose Halson has been a teacher, an editor and writer, producing hundreds of educational language magazines and courses for children learning English as a Foreign Language, French and Spanish.

Her first teaching job was as academic headmistress of a small, eccentric ballet school, which when bursting at the seams had 32 would-be dancers, aged 11 – 16. Then she taught Spanish to third-year refusers at a London comprehensive. She didn’t manage to impart any knowledge (though the experience worked better than any diet: she lost half a stone). 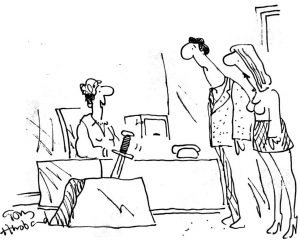 It’s a little test to see if you are worthy of the lady’s hand.

She didn’t manage to get married either, although her mother had packed her off to a marriage bureau when she was 25 (in 1966 an unmarried girl of 25 was “on the shelf” ). She didn’t find a husband, but met some pleasant men and found out how a marriage bureau worked. This was useful when, aged 41, she met Bill, who spotted her talent for connecting people who she felt sure would get on well, and persuaded her to jointly buy the Katharine Allen Marriage & Advice Bureau.

The Bureau blossomed, and in 1992 they took over the oldest Marriage Bureau, established by Heather Jenner in 1939, when it could not cope with a 700% rent increase. 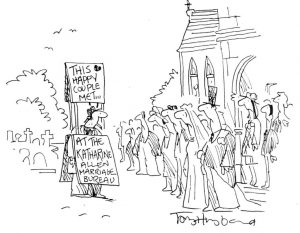 Since selling the combined bureaux in 2000, Penrose and Bill are still in touch with scores of clients, some happily married, some sadly widowed, a few still searching. Many of the Bureau’s married couples have had children, now in their teens. Penrose keeps her eye out for “the One” who may suit them around 2030!

Before she married, Penrose Halson was a teacher, an editor and writer, producing hundreds of educational language magazines and courses for children learning English as a Foreign Language, French and Spanish. She also wrote children’s books, including I Can Read French (translated into 20+ languages), Famous and Fabulous Animals, Wellington’s Way to Learn Spanish, In England, Moonbird Story Books, Parlez Français avec Dougal and scores more (Google Penrose Colyer).

In 1999 Penrose wrote Happily Ever After – how to meet your match (published by Pan), mainly for young women. It was based on the stories of the 30-something clients of the Marriage Bureau, and gave advice on how to find “Enlightened Man”. In England it soon faded – “It’s too sensible, Penrose!” said her editor – but it sold well in Japan.

Her next book, Marriages Are Made in Bond Street – true stories from a 1940s marriage bureau, was published by Macmillan in 2016. It was delayed due to other activities, particularly her interest in the Players’ Theatre (Victorian. music hall shows, which Bill puts on), and the Worshipful Company of Turners, one of the City of London’s ancient Livery Companies. Penrose became its first female Master and had a wonderful year concentrating on promoting the craft of turning (beautiful objects made from wood, metal, bone, semi-precious stones – anything which can be shaped by a sharp tool while revolving at high speed on a lathe).

In 2014 the speaker at a meeting of the Freelance Media Group was Tara Cook, then of television production company Origin. Penrose’s marriage bureau stories fascinated Tara, and led to Carnival Films taking an option on the television and film rights of the book.

The stories, funny and tragic, drawn from the extensive archives of Heather Jenner’s Marriage Bureau, make a microcosm of social history: the 1940s from a perspective never previously written about. Heather Jenner and her partner Mary Oliver established their Marriage Bureau in 1939, five months before war broke out. They aimed to help expatriate men – soldiers, planters of tea and indigo, missionaries, businessmen, colonial servants, businessmen – who saved up their leave to come to England and find a wife.

War brought a flood of local clients: single women who knew of the terrible dearth of potential husbands after the First World War, and men wanting a personal ally to write to, have a child with, come home to after fighting abroad. 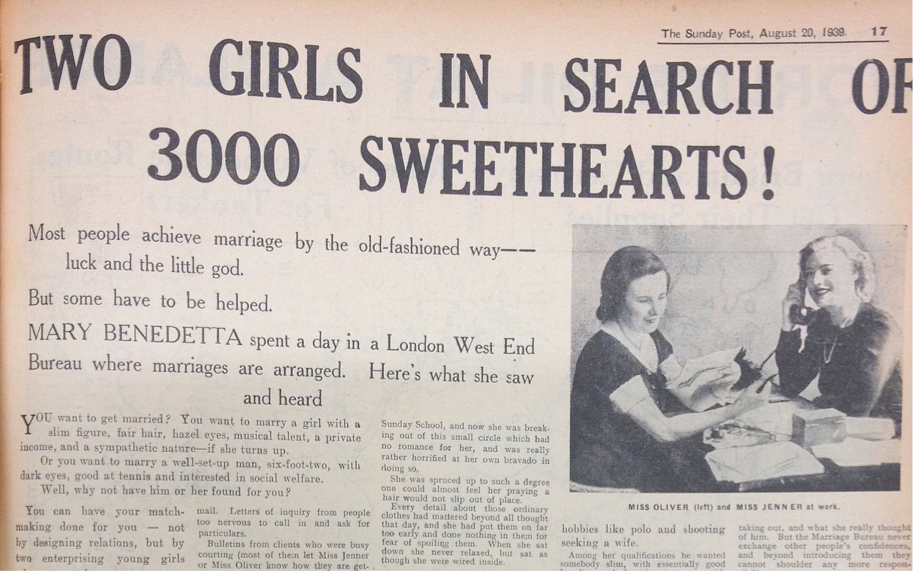 The Bureau survived the bombing and devastation of 1939-45, and the grim aftermath of war. It never closed. The match-makers refused to be distracted from the business of solving the eternal conundrum: who might marry whom.

In his Mail on Sunday review of Marriages Are Made in Bond Street Craig Brown wrote: It reads as though adapted from a television production. Perhaps it will work out the other way round!